With apologies for the continued delay to the artifact recognition series of posts - I've been distracted with some scanner problems - I thought I'd do a quick post on a recent methodological development that's generated some buzz in the field as well as in the media. The media buzz: 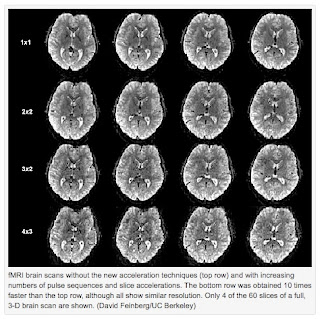 And in case you want to read the actual publication, it was published at PLoS ONE in early January. The work is part of the Human Connectome Project, an NIH-funded consortium involving Washington University (St Louis), Oxford, Minnesota and Berkeley. David Feinberg is the Berkeley representative.

The implications of these methodological developments could be quite substantial, possibly allowing better interpretation of brain dynamics than is currently permitted with the typical fMRI temporal resolution of two seconds or so. Of course, there are caveats. One is that the BOLD response is still low-pass filtered. And another is that the new "go faster" method involves several separate steps, each of which tends to exacerbate head motion sensitivity. Still, it looks good on highly motivated volunteers!
Posted by practiCal fMRI at 8:14 PM 0 comments