This is going to be among the more unusual blog posts I've written. Here goes nothing.

The back story. A few years ago I decided to take a stab at writing fiction. The result was Bubble Chamber, an academic satire with a scientific twist. My intention? To see if I could write a novel, to actually finish it and get it into the public domain as an end point. Check! The process wasn't even sufficiently painful to dissuade me from future forays into novel writing. Just not yet, I have too many other irons in the old fire.

Towards the bottom of the post you can read a synopsis of Bubble Chamber along with a little contrived biography of yours truly. I am also tempted to include here a link to Amazon so that you might procure a copy of my literary scribbling for yourself. But I won't do that just yet. We need to make a quick detour.


It transpires that a young Englishman by the name of Chris Graham has been steadily riding his bicycle, solo and unsupported, around the circumference of Canada and the USA since the beginning of May. He is now in Maine, approaching Canada for the second time and about to commence the last leg of his marathon journey. His current location, as well as the route already completed, can be seen in real time courtesy of his YBTracking page. A flight back home to the UK on Christmas Eve beckons as the final reward for all of Chris's hard work. (Motto: If in doubt, pedal!)

Chris is doing his ride for charity. Specifically, Chris is raising money for Alzheimer's Research UK. You see, Chris is likely to develop dementia in a not too distant future. He carries the gene for early onset Alzheimer's, a disease that has claimed the lives of many of his close relatives, including is father and grandfather, at an age that Chris himself is now rapidly approaching. You can learn more about Chris and his family history on his web page.

This is no sob story, however. Far from it. In fact, following Chris on his Facebook page has brought smiles and laughs to many thousands of people this year. Watch one of his video updates then tell me you won't be back to see what happens next! Better yet, quit reading this blog and pop on over to Chris's Just Giving web page to send him some money right now, then go peruse the photos and videos on his Facebook page. Thanks, and goodbye! 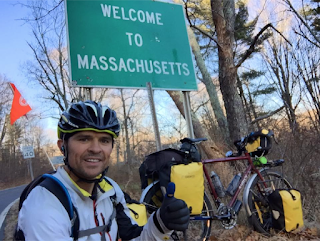 If I didn't just lose you to an immediate donation then I have a proposition for you. Chris is a mere three lousy UK grand from hitting a £40K target and I want to do a little something to help him get there. All proceeds arising out of sales of my aforementioned novel were committed 100% to charity from the moment I conceived of writing it. That hasn't and won't change. An assisted living charity in the eastern US has received very occasional, very small checks over the years. But for the rest of this year at least, all proceeds from sales of Bubble Chamber - available via this Amazon page - will go to Dementia Adventure. I am also going to send along an equivalent amount of my own money for each copy sold so that you have extra inducement to go buy the book.

If you prefer to ignore my book entirely and simply donate to Chris that is just peachy. Or donate to Chris and then go buy the book, I won't stop you. Either way, join Chris virtually as he goes into the last three weeks of a truly epic bike ride. Along the way, take the time to think about just what it is you want to achieve with what remains of your life. We could probably all use a little bit more of Chris Graham's irrepressible spirit.