Have you ever wondered whether it's appropriate to put a research subject into a dark, confined tube that makes an awful din, whereupon the subject may learn that his brain has some abnormality, and still expect the subject's brain to operate in a state representative of his normal cognition (and not that of a stressed out basket-case)? And what about the bioeffects of the high magnetic field itself, or of the rapidly switched gradients and their induced electric currents in body tissue? To date there has been scant evidence that the action of studying human cognition via an MRI scanner actually modifies that brain function in a manner that might be considered a significant issue for interpretation of fMRI results.

Putting aside the cognitive effects of a loud background noise and claustrophobia, the question remains whether the static and time-varying magnetic fields are modifying brain function in a substantial fashion. There are some well-known side effects of high magnetic fields: vertigo (see Note 1), and a metallic taste are the two phenomena tied directly to presence of, or movement through, a high magnetic field. (See Note 2.) But these effects tend to be mild and/or transitory, as a subject acclimatizes to the magnetic field, and can usually be rendered negligible by taking care not to make rapid head movements in or around the magnet.

A colleague forwarded to me yesterday a paper from a Dutch group (van Nierop et al., "Effects of magnetic stray fields from a 7 tesla MRI scanner on neurocognition: a double-blind randomized crossover study." Occup. Environ. Med. 2012 Epub) that investigates the effects of head movements in the intense stray field region of a 7 T magnet. So, first of all, some good news: if you're doing fMRI at 1.5 or 3 T and you're not in the habit of asking your subjects to thrash their heads around wildly at the mouth of the magnet or once inside the magnet bore, then so far as is known today you're in the clear. The effects reported in this paper pertain specifically to head movement in the really intense gradients that comprise the stray magnetic field around the outside of a passively shielded 7 T magnet. (The iron shield is outside the magnet, leaving considerable gradients in the vicinity of the magnet when compared to the actively shielded 1.5 and 3 T magnets most of us have nowadays.)

And with that preamble let's look at the summary of the paper:

RESULTS:  Of the six tested neurocognitive domains, we demonstrated that attention and concentration were negatively affected when exposed to TVMF within an SMF (varying from 5.0% to 21.1% per Tesla exposure, p<0.05), particular in situations were high working memory performance was required. In addition, visuospatial orientation was affected after exposure (46.7% per Tesla exposure, p=0.05).

CONCLUSION:  Neurocognitive functioning is modulated when exposed to movement-induced TVMF within an SMF of a 7 T MRI scanner. Domains that were affected include attention/concentration and visuospatial orientation. Further studies are needed to better understand the mechanisms and possible practical safety and health implications of these acute neurocognitive effects.

Okay, so let's make sure we're clear that although the test magnetic field strengths mentioned are 0.5 and 1.0 T, this refers to two heterogeneous regions of a stray magnetic field on the outside of a 7 T magnet: 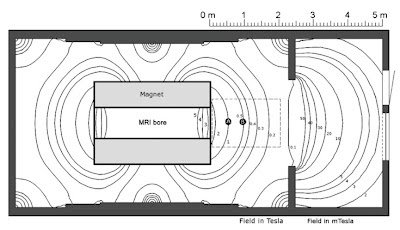