As I mentioned yesterday, there is a tendency when reviewing the output of a volume registration ("motion correction") algorithm to attribute all variations to real head motion. But, as was demonstrated last October, the magnetic susceptibility of the chest during breathing produces shifts in the magnetic field that vary spatially across the head, producing translations and shearing in EPI data that the volume registration algorithm can't distinguish from real head motion. Here I want to quickly review other major mechanisms by which we can get apparent head motion.

Let's start with contributions to real head motion. These include slow compression of foam designed to restrain the head, relaxation or tension of neck muscles, swallowing, fidgeting and the like. Printed head cases, bite bars and other restraint systems are of use here. Then there are body motions, including the extremities, that produce movement of the head via the neck. This is why you should instruct your subjects not to move at all during the scan. Telling a subject he shouldn't move his head is tantamount to saying that moving his feet is okay, and it's not. Subjects should move, e.g. to scratch or stretch, only when the scanner is silent.

Also included in the mechanical motion category is respiratory chest motion that couples unavoidably to the head because of that pesky neck thing. Pulsations of the brain with the cardiac cycle are another source of unavoidable direct motion in the organ of interest. The latter is real brain motion, of course.

Next, body motions (including from respiration) can produce head movement in the magnetic field via instability of the patient bed. Back in the early 2000s we had a Varian 4 T scanner. We had to construct rollers to catch and support the bed sled in the magnet bore because we had a cantilevered bed that deflected like a springboard otherwise. Every tiny movement of the subject caused the bed sled to bounce. For stability we want a strongly coupled system - subject to bed, bed to gradients/magnet - and we need to avoid any relative movement between them. I was reminded of this mechanism again recently. It's something to keep in mind as we work on respiratory instabilities because I note that my Trio has a bed cantilevered on the magnet face whereas Prisma scanners have a bed supported on the floor in front of the magnet. The latter should be a lot more stable, provided the bed has a solid foundation underneath it.

So far all the mechanisms I've considered have had a direct mechanical connection between the source of the motion and the brain. Chest motion can also affect the magnetic field via changing magnetic susceptibility from the air-filled lungs, as previously demonstrated. This is a through-space mechanism. In principle, movement of the extremities or any other part of the body (or other equipment in the bore) might also produce perturbation of the magnetic field across the head via magnetic susceptibility, but my intuition is that this would be a minor contributor to overall instability compared to the effects from the chest.

A well-known motion-like effect arises from thermal drift in the magnet. The gradients get warm with use and over time this causes drift in the magnetic field, e.g. via passive shimming iron that doesn't have the water cooling of the gradient set. Re-shimming can offset some of the effects of this mechanism between runs, but not within a run. When viewed from the perspective of your agnostic volume realignment algorithm, thermal drifts appear a lot like slow (real) head movements, e.g. as foam compresses or neck muscles relax. Re-shimming between runs helps with both, but I'm afraid it doesn't do anything within a run. De-trending is usually used to good effect here.

There are doubtless other sources of instability that can manifest as apparent head motion - anything that causes shifts in the on-resonance frequency during an EPI time series will do it - but here I've covered the main mechanisms of concern. Given robust head restraint to mitigate most of the direct head motion mechanisms (except brain pulsations), it seems that the next largest instabilities to tackle are the respiratory motion mechanisms. We have three to work on: residual direct motion through the neck, magnetic susceptibility of the chest, and the possible deflection of the patient bed. 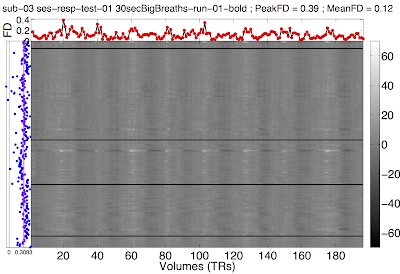