Don't ask me why there's no apostrophe, it looks possessive to me. Perhaps it's (the) Gibbs artifact rather than Gibbs (his) artifact. Most people simply refer to the effect as ringing anyway, so let's move on. This post concerns a phenomenon that, like aliasing last time, isn't unique to EPI but is a feature of all MRIs that are obtained via Fourier transformation.

In short, ringing is a consequence of using a period of analog-to-digital conversion in order to apply a (discrete) FT to the signals and produce a digital image. Or, to put it another way, we are using a digital approximation to an analog process and thus we can never properly attain the infinite resolution that's required to fully represent every single feature of a real (analog) object. Ringing is an artifact that results from this imperfect approximation.

We had already encountered one consequence of digitization in the Nyquist criterion in PFUFA Part Six. However, for our practical purposes, ringing isn't a direct consequence of digitization like the Nyquist criterion, but instead results from the duration of the digitization (or ADC) period relative to the persistence of the signals being measured. In principle, a signal decaying exponentially decays forever, which is rather a long time to wait for the next acquisition in a time series, so we instead enable the ADC for a window of time that coincides with the bulk - say 99% - of the signal, then we turn it off. This square window imposed over the exponentially decaying signal causes some degree of truncation, and it's this truncation that leads to ringing. (See Note 1.)


An example of ringing in EPI of a phantom

Let's start with an unambiguous example of ringing by looking at the artifact in a homogeneous, regular phantom. Below is a 64x64 matrix EPI acquired from a spherical gel-filled phantom. You're looking for the wave-like patterns set up inside and outside the edges of the main signal region: 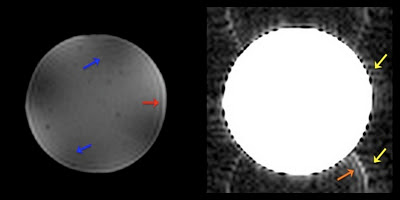 In the left image, which is contrasted to highlight ringing artifacts within the signal region itself, the primary ringing artifact appears as a series of concentric circles, each with progressively smaller diameter and lower intensity as you move in from the edge of the phantom. One section of the bright bands is indicated with a red arrow, but you should be able to trace these circles all the way around the image. Also visible is a strong interference pattern (blue arrows) that arises between the aforementioned ringing artifact and the overlapping N/2 ghosts. This is because the ghosts maintain the contrast properties of the main image; they are, after all, simply weak (misplaced) clones of the main image.

Read more »
Posted by practiCal fMRI at 5:48 AM 0 comments