I was recently made aware of some artifacts on diffusion-weighted EPI scans acquired on a colleagues’ scanner. When I was able to replicate the issue on my own scanner, and even make the problem worse, it was time to do a serious investigation. The origin of the problem was finally confirmed after exhaustive checks involving the assistance of several engineers and scientists from Siemens. The conclusion isn't exactly a major surprise: fat suppression for diffusion-weighted imaging of brain is often insufficient. And it seems that although the need for good fat suppression is well known amongst physics types, it’s not common knowledge in the neuroscience community. What’s more, the definition of “sufficient” may vary from experiment to experiment and it may well be that numerous centers are unaware that they may have a problem.

Let’s start out by assessing a bad example of the problem. The diffusion-weighted images you’re about to see were acquired from a typical volunteer on a Siemens TIM/Trio using a 32-channel receive-only head coil, with b=3000 s/mm2 (see Note 1), 2 mm isotropic voxels, and GRAPPA with twofold (R=2) acceleration. These are three successive axial slices:


The blue arrows mark hypointense artifacts whereas the orange arrow picks out a hyperintense artifact. Even my knowledge of neuroanatomy is sufficient to recognize that these crescents are not brain structures. They are actually fat signals, shifted up in the image plane from the scalp tissue at the back of the head. (If you look carefully you may be able to trace the entire outline of the scalp, including fat from around the eye sockets, all displaced anterior by a fixed amount.) I’ll discuss the mechanism later on, but at this point I’ll note that the two principal concerns are the b value (of 3000 s/mm2) and the use of a 32-channel array coil. GRAPPA isn’t a prime suspect for once!


The signal from white matter fibers changes as the diffusion gradient direction changes. That’s what you want to happen. But the displaced fat artifacts also change intensity with diffusion gradient direction, meaning that the artifact is erroneously encoded as regions of anisotropic diffusion. Thus, when one computes the final diffusion model, the brain regions contaminated by fat artifacts end up looking like white matter tracts. In the next figure the data shown above was fit to a simple tensor model, from which a color-coded anisotropy map can be obtained: 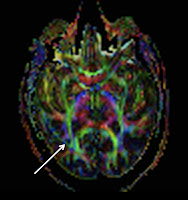 The white arrow picks out the false “tract” corresponding to the artifact signal crescent we saw on the raw diffusion-weighted images. I suppose it’s remotely possible that this is the iTract, a new fasciculus that has evolved to connect the subject’s ear to his smart phone, but my money is on the fat artifact explanation.

Clearly, in the above image there is no easy way to distinguish the artifact from real white matter tracts by eye, except by using your prior anatomical knowledge. And it's likely to confuse tractographic methods, too, because it has very similar geometric properties to those that tractographic methods attempt to trace. So let's take a look at the origin of the problem and then we can get into what you want: solutions.
Read more »
Posted by practiCal fMRI at 8:49 AM 8 comments