I had initially planned to go into 2D imaging next, but after some consideration I've decided instead to tidy up a few loose ends that follow more naturally from the last post: gradient-recalled echoes and slice selection. Then, in Part Nine I promise to introduce the second in-plane dimension. This route should better allow me to bring everything together at the end of the next handful of posts and permit you to see, and understand, the EPI pulse sequence at a glance. That's the plan. Let's see if we can make it work! (See Note 1.)

In the last post I used a frequency encoding gradient, also called a readout gradient (because it's on while the signal is being recorded, or read out), to produce one-dimensional images - profiles - of water-filled objects. This isn't the typical way that the signal is acquired, however. Instead, it is typical to acquire a refocused, or echoed, signal that has a certain symmetry in time in order to obtain some experimental benefits. I'll mention these benefits later. First, let's see how the gradient echo works.

Here is a simple gradient echo pulse sequence that is adapted from the simple readout gradient-only sequence that was considered in Part Seven: 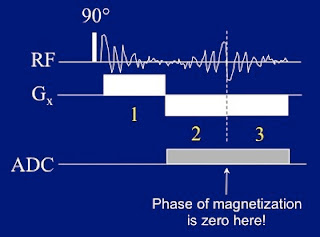 The first thing to note is that the period of data acquisition (analog-to-digital conversion) has been delayed and now occurs in concert with a readout gradient having a negative sign, rather than being coincident with the positive gradient period labeled 1 in the figure. Also, the duration of data acquisition has been doubled. So instead of acquiring a free induction decay (FID) almost immediately after the 90 degree excitation pulse, we are now acquiring an echo signal at a later time. How and why does this echo form?