Amazing accounts of fires in and around MRIs


An article in the latest installment of The RADIANT is just too remarkable not to share. The article reports two MRI facility fires. In the first, the fire started away from the scanner but ended with the fire out and the magnet still on, surrounded by charred debris. The magnet couldn't be shut down (quenched) because the fire had destroyed the emergency quench circuitry! In the other incident the cause of the fire was the MRI scanner itself; arcing in the gradient cables. Read the article, look at the pictures. Thought-provoking stuff.

I'm hyper-sensitive to both of these scenarios, the first because we are about to move my scanner into a brand new building so I am redoing the safety training and reviewing procedures, and the second because my scanner had some serious arcing in 2010. Luckily the arcing was caught before the whole facility went up in flames. Even so... Here's the penetration panel where the gradient power lines enter the magnet room: 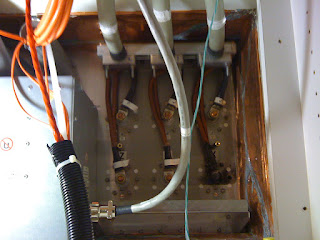 Note the charring at bottom-right, the negative terminal for the X gradient. That's the gradient used for readout for EPI so it gets by far the most use in my scanner. (FMRI is practically all we do!)

Here's the charred filter removed from the penetration panel: 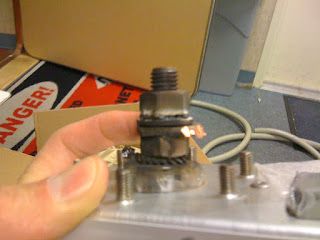 And here's what ultimately happened at the gradient set, at the other end of the -Gx connection: 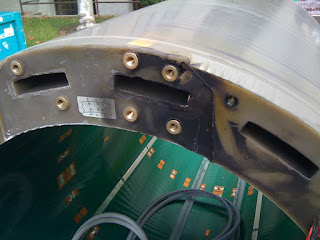 This picture was taken as the old gradient set was wheeled away, to be replaced with a new one. The intense heat and vibration had caused the X gradient to short out. Thankfully it was only the gradient and a filter that bought the farm. It could easily have been the entire facility!