After a very long wait that spanned two prefabricated buildings - we weren't supposed to call them trailers, some sort of negative connotation - the Henry H. Wheeler, Jr. Brain Imaging Center took its first step into a permanent home yesterday with the move of the BIC's existing 3 T Siemens Trio scanner into one of the magnet bays in Li Ka Shing Center for Biomedical and Health Sciences (LKS). With space for two 3 T MRIs, a 7 T MRI, a MEG and a host of functional support facilities, including TMS and EEG prep rooms as well as mechanical and electrical workshops, there will be quite a lot of moving in to be done over the years ahead. For the time being, however, the task is to get the very busy Trio back up and scanning as quickly as possible. Here are a few pictorial and video highlights of the magnet move, with a couple of interesting and hopefully educational features indicated. 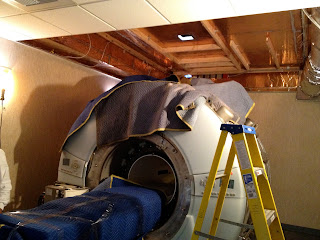 The removable roof section was lifted out by crane: 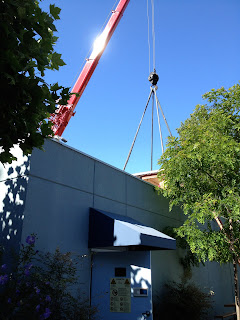 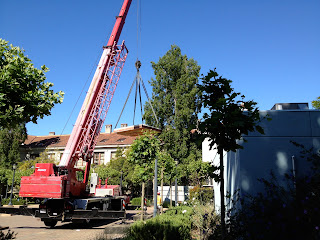 Then the magnet, weighing some 32,000 lbs with the patient table sled attached and the cryostat full of liquid helium, was lifted out and staged in an adjacent parking lot: 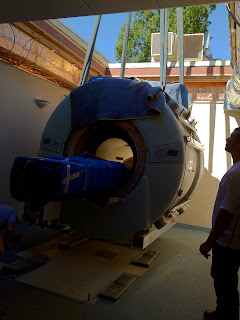 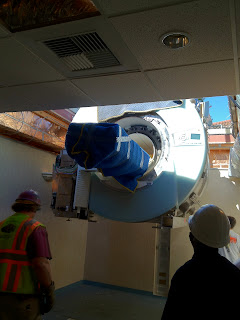 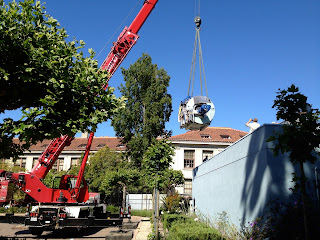 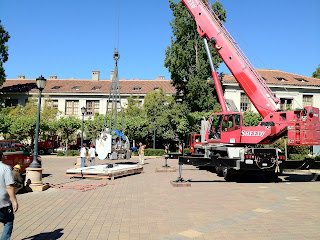 Once the crane had been relocated, the magnet was lifted again onto a waiting flatbed truck: 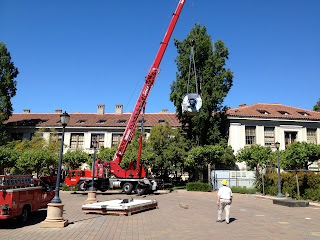 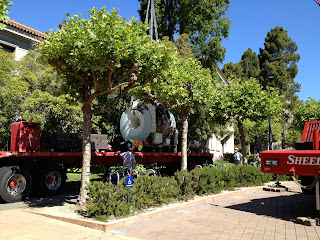 Here's a view of an MRI magnet you don't see every day. Covers removed, all the functional parts of the RF electronics, the helium refrigeration system, patient bed controllers and all kinds of stuff are revealed to the world: 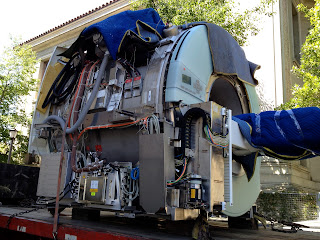 After a short drive from the Wellman Court onto Oxford Street in front of Li Ka Shing Center, the magnet was again staged to allow the flatbed truck to depart. One less obstacle in the road! 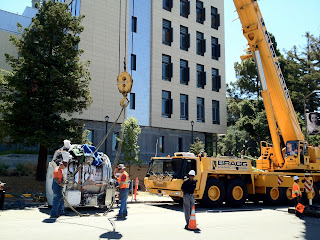 The next task was to remove the 68,000 lb access hatch cover located in a sidewalk adjacent to LKS. The hatch is a steel frame covered in concrete, with six lifting points. Eye bolts were put into place ready for the lift: 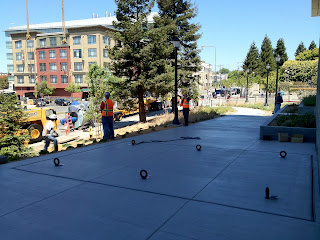 Here's the underside of the hatch cover, seen from the corridor inside the Brain Imaging Center space: 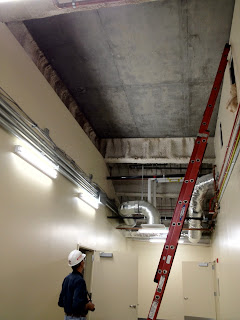 The hatch cover was craned away... 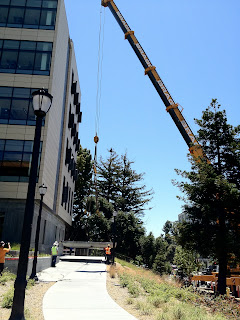 ...and stored temporarily on the street. 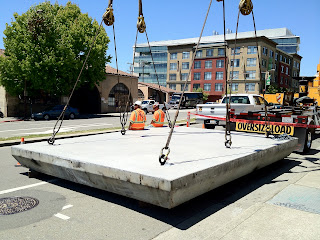 This left a sizable hole - one large enough to get a 7 T human MRI through - above the corridor of the BIC space: 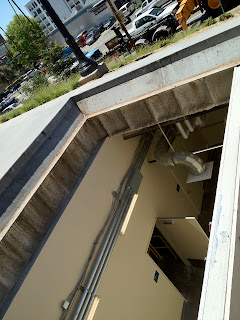 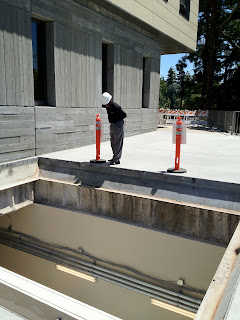 Then it was time to lift the magnet into its new digs. Here's a little bit of video of the lift and some photos of the magnet being placed in the BIC corridor: 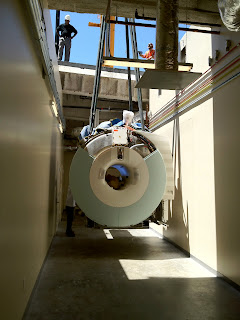 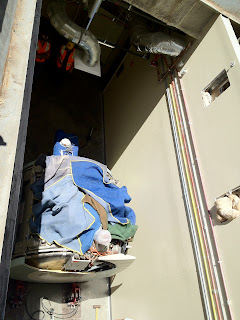 Skates were fitted to the steel rails on which the magnet rests: 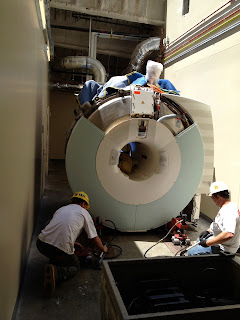 The magnet was then rolled along steel plates - don't want to ruin a brand new floor! - down the loooong corridor of the new BIC facility, from the access hatch at the far end to the farthest 3 T bay. A section of the magnet room wall - occupied by three gents in orange, below - had been left open to provides access to the permanent location: 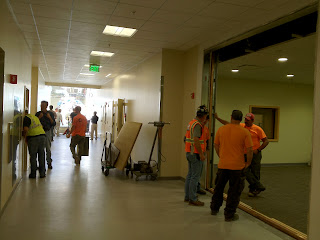 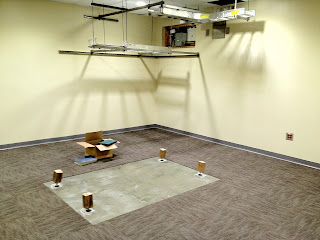 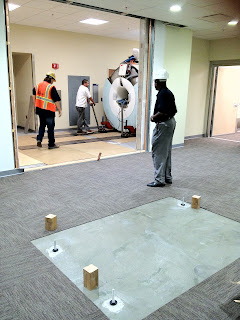 After some jigging to make the turn and some lifting to clear the sill of the RF shield wall, the magnet ended its day-long journey in its new berth: 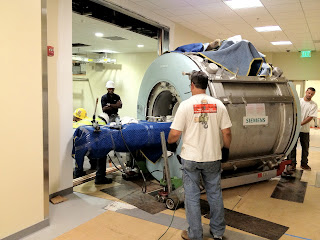 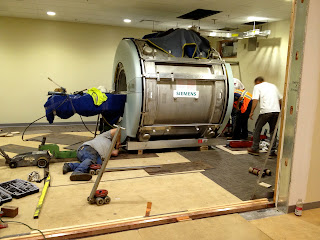 That just left several more hours' work by the riggers to set and level the magnet, followed by some poor chap to weld a new quench duct to the top of the magnet (he'd been told he'd be needed at 2 pm, he was still hanging out reading fiction at nearly 8 pm), but I wouldn't know much about that because it was getting close to my bed time. They worked on late into the evening though, because by this morning all manner of cables had appeared, an RF screen wall was being finished, and there was frantic activity to prepare the electrical and water connections to allow the magnet's cold head (helium refrigerator) to be reconnected as soon as possible: 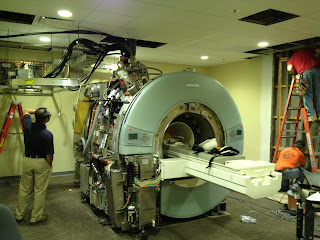 So there you have it. One magnet successfully relocated. With luck the device survived its trip and will be in rude good health within a couple of weeks. I get to hang about and spectate for another 7-10 days before I have to do any actual work. Sadly, however, that means I have no excuse not to produce the new facility's revised safety training manual and get a bunch of other admin tasks completed. A change is as good as a rest, right? Mmmm.