While the gradient set is water-cooled, the gradient cables and gradient filters still rely upon air cooling in many scanner suites, such as mine. In the case of the gradient filters, the filter box on my Siemens Trio came with an opaque cover, which we replaced with clear plastic to allow easy inspection and temperature monitoring with an infrared (IR) thermometer:

The gradient cables between the filter box and the back of the magnet can also decay with use. If this happens, the load experienced by the gradient amplifier changes and this can affect gradient control fidelity. (More on this below.) The cables can be damaged by excess heat, and this damage leads to higher resistance which itself produces more heating. A classic feedback loop!


Monitoring both the gradient filters and cables is as easy as purchasing an IR thermometer and some thermocouples. We have a Fluke model 561 IR thermometer (above), costing about $200, which has three nice features. Firstly, it can be used fairly safely inside the magnet room. The unit uses two AA batteries. There is almost no noticeable force on the unit until you take it right into the magnet bore. In well-trained hands it is perfectly safe to use around a 1.5 T or 3 T magnet. It will also perform flawlessly in the fringe field of a 3 T magnet.

The second feature is it's main one: the IR sensor. A laser sight allows easy targeting. This permits quick surface thermometry of the cables, as shown in the photo below, and also of the gradient filters if you have a clear cover like I do. There is a surprising amount of temperature variation along the cables, I find, so having the ability to sweep along a cable can be useful. 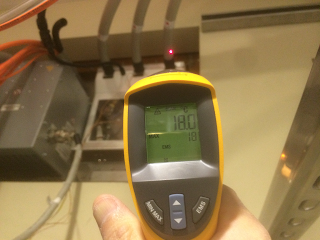 The third feature is something you might well skip for simplicity, but I like it. The Fluke is compatible with K type thermocouples. They plug right into the top: 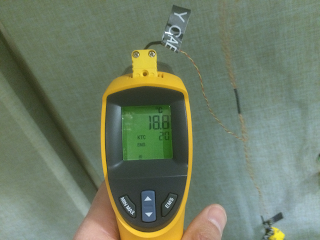 We have installed six thermocouples inside the gradient filter box, one per cable terminal. We used Kapton heat resistant tape to mount them. You can see the tape in the uppermost photo, as nearly horizontal brown bands on the white gradient cable sleeves. Monitoring is as simple as plugging in the desired plug and pulling the trigger on the meter. The Fluke then displays the temperature of the thermocouple rather than of the IR sensor.

At the moment I only measure gradient cable temperatures when I'm running long diffusion scans and I want to be sure that I'm not breaking anything. But it would be very easy to incorporate these measurements into routine Facility QA. I would record the starting and ending temperatures of the thermocouples I have taped into place, for consistency. And of course I'd use a constant acquisition protocol; perhaps a diffusion imaging scan to increase the gradient duty cycle and really drive the system. (Right now my Facility QA consists of three ~6 min EPI runs, so only the readout gradient axis has a reasonably high duty cycle, while the other two channels aren't used enough to provoke much departure from room temperature.)

We had to have our gradient cables replaced once because of runaway resistances. For certain diffusion scans we could see cable temperatures over 60°C. But at the time we didn't have the thermocouples installed. We were only alerted to the possibility of a cable resistance/heating issue when our gradient control became unpredictable. We would occasionally see changing levels of distortion in EPI scans; sudden stretches or compressions unrelated to subject movement. (These aren't my data but there is a near identical example posted here.) Had we been monitoring the gradient cable temperatures weekly, we might well have seen a trend towards increasing cable temperatures before the intermittent distortion reported by users, and been in a position to alert the service engineer.

With any luck you will notice the gradient control issues as your first symptom that something is wrong. In the extreme, however, you may find that the gradient connectors decay under the extreme heat. (See the second and third photos in this earlier post on fires in MRI facilities.) By the time your filter connectors are turning to dust you will likely be experiencing occasional spiking events in EPI. It might be externally generated noise that is being conducted into the magnet room by virtue of insufficient RF filtering, or spikes might be generated at the hot connectors. Either way, it's a very good idea to catch the problem long before it gets to this stage!