This is a continuation of the previous post looking at MB-EPI on a receive coil with limited spatial information provided by its geometry, such as the 12-channel TIM coil or the 4-channel neck coil on a Siemens Trio.

Simultaneous multi-slice (SMS), aka multi-band (MB), offers considerable time savings for diffusion-weighted imaging (DWI). Unlike in fMRI, where MB factors of 4 or more are quite common, in DWI few studies use MB factors greater than 3. While it may be feasible in principle to push the acquisition time even lower without generating artifacts using a large array coil like the Siemens 32-channel coil, we run into another consideration: heating. Heating isn't usually a concern for gradient echo MB-EPI used in conventional fMRI experiments. In fMRI, the excitation flip angles are generally 78° or less. But with DWI we have a double whammy. Not only do we want a large excitation flip angle to create plenty of signal, we also require a refocusing pulse that is, by convention, set at twice the flip angle of the excitation pulse. (The standard nomenclature is 90° for excitation and 180° for refocusing, but the actual angles may be lower than this in practice, for a variety of reasons I won't go into here.) Now the real kicker. The heat deposition, which we usually measure through the specific absorption rate (SAR), scales quadratically with flip angle. Thus, a single 180° refocusing pulse deposits as much heat as four 90° pulses! (See Note 1.) But wait! It gets worse! In using simultaneous multi-slice - the clue's in the name - we're not doing the equivalent of one excitation or refocusing at a time, but a factor MB of them. Some quick arithmetic to give you a feel for the issue. A diffusion scan run with 90° and 180° pulses, each using MB=3, will deposit fifteen times as much heat as a conventional EPI scan run at the same TR but with a single 90° pulse. On a 3 T scanner, it means we are quickly flirting with SAR limits when the MB factor goes beyond three. The only remedy is to extend TR, thereby undermining the entire basis for deploying SMS in the first place.

But let's not get ahead of ourselves. With a low-dimensional array such as the Siemens 12-channel TIM coil we would be delighted to get MB to work at all for diffusion imaging. The chances of flirting with the SAR limits are a distant dream.

The initial tests were on the FBIRN gel phantom. I compared MB=3 and MB=2 for the 32-channel, 12-channel and neck coils using approximately the same slice coverage throughout. The TR was allowed to increase as needed in going from MB=3 to MB=2. Following CMRR's recommendations, I used the SENSE1 coil combine option throughout. I also used the Grad. rev. fat suppr. option to maximize scalp fat suppression, something that we have found is important for reducing ghosts in larger subjects (especially on the 32-channel coil, which has a pronounced receive bias around the periphery). For the diffusion weighting itself, I opted to use the scheme developed for the UK Biobank project, producing two shells at b=1000 s/mm² and b=2000 s/mm², fifty directions apiece. Four b=0 images are also included, one per twenty diffusion images. (For routine use we now actually use ten b=0 images, one every ten DW images, for a total of 111 directions.) The nominal spatial resolution is (2 mm)³. The TE is 94.8 ms, which is the minimum value attainable at the highest b value used.

There are over a hundred images we could inspect, and you would want to check all of them before you committed to a specific protocol in a real experiment because there might be some strange interaction between the eddy currents from the diffusion-weighting gradients and the MB scheme. For brevity, however, I will restrict the comparisons here to examples of the b=0, 1000 and 2000 scans. I decided to make a 2x2 comparison of a single band reference image (SBRef), a b=0 image (the b=0 scan obtained after the first twenty DW scans), and the first b=1000 and b=2000 images in the series. While only a small fraction of the entire data set, these views are sufficient to identify the residual aliasing artifacts that tell us where the acceleration limit sits.

For the 12-channel coil, however, we can see residual aliasing in the b=0 scan for MB=3:


The SNR is too low to see the residual aliasing in the b=1000 and b=2000 scans at MB=3, but given the effects at b=0 we should assume they're there. However, I should note that the artifact I've shown above was the most prominent example I could find, suggesting that MB=3 on the 12-channel coil might be acceptable under some circumstances. The MB=2 data appear to be reasonably artifact-free throughout.

If you're wondering what the rendered slice dimension looks like, I'm sparing you an even lengthier post. However, I found that artifacts were more prominent in-plane than through plane. This is different to the situation with MB-EPI for fMRI, where artifacts are either similarly visible in each view, or banding may be visible in the slice dimension when there are no in-plane artifacts visible. Could it be the use of SENSE1 coil combination option, perhaps? I will try to learn more about the differences in further tests when I get the time. It's also interesting that contrasting at the noise level didn't lead to different conclusions than simply contrasting at the signal level, so again I've given just the one contrast to keep the post manageable.

Back to data. The neck coil exhibits clear residual aliasing for MB=3 at b=0 and, if you have a good eye, you can see artifacts at b=1000, too:


Does the presence of some artifacts in b=0 images at just MB=2 mean that multi-band is unacceptable on the neck coil? Not necessarily. It just means we'd have to be extra careful before using it for real at MB=2, and I don't think I would want to risk MB=3 on that coil. But we would want to look very carefully at regions of poor magnetic field homogeneity for artifacts in brain data. Talking of brains....

Time constraints didn't permit me to acquire brain data for MB=3, only for MB=2, on all three coils. I do have an earlier comparison for MB=3 and MB=2 for the 32ch and 12ch coils, however, which I'll come back to at the end. Let's first look at MB=2 on all three coils.

The acquisition parameters for brain testing are the same as for the phantom tests. Again, I compare a 2x2 matrix comprising the SBRef image, an example b=0 image, and the first b=1000 and b=2000 scans from the full DW acquisition. There will be two views apiece: the in-plane view, which is as the data are acquired, and then a rendered view of the slice dimension to see how slice leakage or banding artifacts might manifest, just in case the heterogeneity of brain introduces something new. Finally, to see how artifacts and SNR propagate through to final results, I'll compare a simple tensor analysis of the full data set. I'll show the apparent diffusion coefficient (ADC) map, a trace image, a fractional anisotropy (FA) map in grayscale, and then a color FA image. The tensor analysis option on the scanner was used to produce these processed images.

Here are the MB=2 brain results for the 32-channel coil:

This result is encouraging for the use of MB=2 on the 12-channel coil. At the end I'll show color FA images that suggest it might be permissible to go as far as MB=3 on the 12-channel coil, but you would definitely want to run your own phantom tests first. Then, in brains, I would pay particularly close attention to regions of high magnetic field heterogeneity - the usual suspects: frontal lobes, temporal lobes, deep brain - because of the suggestion above, in the phantom data, of a shim-related residual aliasing for MB=3.

How did the neck coil do?

Overall, not too bad. There are no artifacts visible to the naked eye, which is encouraging for those of us who might want to (or be forced to) use the neck coil for non-human brains. But there is a clear degradation of signal-to-noise overall, compared to the other two coils. This three-way comparison of the color FA maps shows it pretty well: 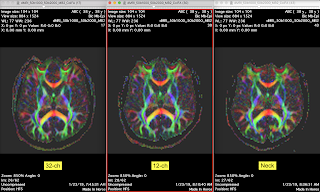 Although the slices don't match exactly (sorry!), it's still possible to discern the noisier data produced in going from the 32-channel to the 12-channel coil, and from the 12-channel to the neck coil. There is a more mottled - less smooth - appearance as you move left to right. It's not a surprise to see SNR degrade in the order shown. Not only does the number of receive channels decrease, but the "filling factor" - the amount of coil filled with brain versus space - also decreases from 32ch to 12ch to neck coil. Still, there are no discrete artifacts, suggesting that MB=2 is acceptable on the 12-channel coil. Likewise, the neck coil produces reasonable-looking results on a real brain in spite of the subtle residual aliasing artifacts we saw in the phantom data. If the lower SNR was a problem, a simple tactic would be to increase the voxel size from (2 mm)³ to, say, (2.2 mm)³ for a 33% SNR boost.

Is the SNR worse for MB=2 than it would be for un-accelerated DWI? That's a test I didn't do, but will. It would be an interesting comparison, because the total acquisition time would be above 12 minutes without MB, rendering the entire experiment more susceptible to motion. It is entirely possible that the SNR would end up lower without MB! Except that an earlier test I ran, comparing MB=2 and MB=3 on the 12-channel and 32-channel coils only, suggests that MB does indeed reduce the SNR, even as it shortens the total acquisition time: 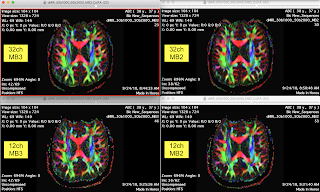 1.  SAR also scales quadratically with B₀, so don't assume that anything you can do at 3 T will be approximately twice as demanding if run at 7 T. The actual demands will be (7x7)/(3x3) = 5.4 times greater! You might be able to use your 7 T to reheat your coffee between subject scans!

Posted by practiCal fMRI at 5:22 PM